I was recently interviewed by author and editor extraordinaire, Eilis Flynn, for her Story Behind the Story blog. Since I thought the story behind Crazy, Stupid, Dead would interest my readers, with Eilis’s permission, I’m sharing it here.

Story Behind the Story: Crazy, Stupid, Dead by Wendy Delaney

The truth and memory are two important parts of all writing, especially so in the mysteries of Wendy Delaney. The seventh novel in her Working Stiffs mystery series confronts Delaney’s heroine with a death that may not be what it seems to be. Her goal as a mystery writer is to provide the reader with a story that keeps them guessing as they follow her “human lie detector” heroine all the way from the first clue to the solution. (And it kept me going, too, as her editor.)

What’s the logline?  Drowning in your own bathtub is a stupid way to die—the recurring line that causes Charmaine to question how such a thing could have happened to a friend of her grandmother who was in relatively good health.

What were you thinking about when the idea occurred to you?  I’m always on the hunt for ways in which a well-motivated person could get away with murder. One afternoon, while combing through dozens of news stories on the subject (yes, I have an interesting search history!), I read a detective’s comments about how murder by drowning can be easier to get away with. If there are no witnesses and no evidence to suggest that it’s anything other than accidental… So it’s a murder that doesn’t necessarily look like a murder? Perfect! I already had the title I wanted to use—a twist on the movie title, Crazy, Stupid, Love—so all I had to do was to drown my story’s victim in her bathtub so that Charmaine and several other characters could think it was a crazy and/or stupid way to die—and maybe just a little bit suspicious!

How did you conceive of your characters for this story?  My mystery series is set in Port Merritt, a fictional popular retirement town located an easy ferry ride from Seattle, so I typically populate my stories with senior citizens whose middle-aged children live close by, and this story was no exception. The whole gang of recurring characters introduced in book 1, Trudy, Madly, Deeply, is back, so it’s always fun to explore those interrelationships as well as come up with likely suspects for them to interact with. I often draw on personal experience when I populate my stories. In Crazy, Stupid, Dead I feature a secondary character with dementia. That wasn’t my original intention, but seven years of caring for a mom with a failing memory taught me that similar nice old ladies can serve as delightfully unreliable witnesses—perfect for a light-hearted mystery.

Are you pleased with the results, or do you wish you had done anything differently in the story?  Overall, I’m very pleased with how the story turned out. Many of my readers commented about how I kept them guessing, so mission accomplished in terms of the main plot. Really, what fun would it be to read a mystery that is easy to solve? On a personal note, I love my main characters and want to do right by them in their personal lives. Char has some emotional wounds from the past that need to heal, and I feel like good progress was made in this story for her personal growth—something that leads nicely into book 8, A Kiwi Before Dying, which will be coming soon.

Who would play your leads in the movie if you make a deal?  That’s a tough one. I have pictures up on my wall of actors and actresses whom I’ve “cast” for my earlier books. I’d need a time machine for some. For example, Jill St. John. In her fifties, she would have been perfect as Charmaine’s actress mother. Same with Lou Diamond Phillips—the thirty-five year-old version could have been a great fit for Detective Steve Sixkiller. As for Char, since she looks a lot like her mom, the casting could present a challenge, but if Emma Stone would like to gain twenty pounds to play her, fantastic!

What else do you want readers to know?  Since Crazy, Stupid, Dead is the seventh book in my cozy mystery series, I always suggest that readers start with book one, Trudy, Madly, Deeply, not only for a good introduction to Char and her special ability as a human lie detector but because story threads run from book to book. And, yes, her ability is steeped in real science. I became interested in Dr. Paul Ekman’s work way back when and interviewed one of his test subjects, who was kind enough to help me when Char’s character was at the “what if my sleuth could do this” stage. I’ll always be grateful that she was so generous with her time.

Bio:  Wendy Delaney writes fun-filled cozy mysteries and is the award-winning author of the Working Stiffs Mystery series. A longtime member of Mystery Writers of America, she’s a Food Network addict and pastry chef wannabe. When she’s not killing off story people she can be found on her treadmill, working off the calories from her latest culinary adventure. Wendy lives in the Seattle area with the love of her life and is a proud grandma.

Crazy, Stupid, Dead is available at Amazon and is free to read for Kindle Unlimited subscribers 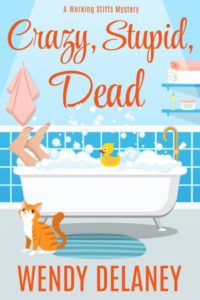 For more stories behind the story, go to http://eilisflynn.blogspot.com/. And thank you, Eilis for the interview!